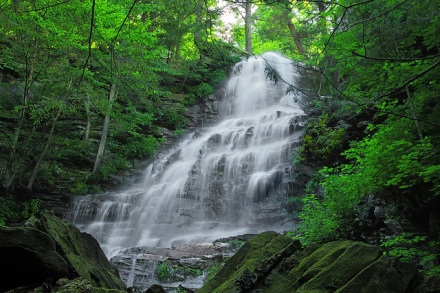 A long time ago when much of the world was still a wild place there was once a waterfall with a beautiful voice. She could sing with the stars and moon. She would sing with the trees of the forest and all the creatures that came to her shores. In all the earth there was nothing like her divine voice. One day the waterfall told herself she was tired of singing and telling stores all the time, but she couldn’t stop her voice from flowing with the waters. As time passed the waterfall’s voice grew dull as it cascaded down over the rocks. It had lost its music of laughter. It only sounded cold and angry as it slapped down into the depths below. There were no more lullabies at night because the trees no longer listened. The creatures of the forest came to her shores only to quench their thirst. They no longer stayed to visit. Even the stars hide themselves from her behind the leaves of tree spirits and veils of clouds. The waterfall began to feel a deep sadness that she had never known. She had never been so alone. She didn’t know what to do. 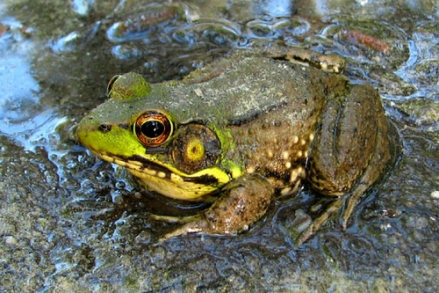 Until one day, a pokey little green frog jumped on a mossy stone at the foot of the waterfall. He began to croak out a song. And croaked and croaked into the night. The next morning, the waterfall called out to the frog and said, “Thank you little web-footed friend. I had forgotten what it feels like to sing out with all your might. For many years now, I have used my voice to say what others wanted to hear. But now I realize that I can only sing the song of songs when I give the gift of presence. You have been a true friend.” After that the frog and waterfall would sing many a new song with each dawning day.

*photo of waterfall by Nicolas A. Tonelli, Pennsylvanian Waterfalls

*photo of green frog found on Frogs Native to Pennsylvania

3 thoughts on “Song of Songs”